This information display shows you how this hospital compares to the national average for a range of measures used to demonstrate quality in joint replacement surgery. Against each measure you will be able to see whether this hospital is performing better than expected, within the expected range or worse than expected for this type of surgery. In some cases, favourable results are indicated by higher numbers and in some cases, by lower numbers. This depends on the type of measure displayed. However, all the thermometer charts have been designed to report better performance on the right hand side and poorer performance on the left hand side.

The green banding represents the expected range of performance for hospitals.

The black marker represents the hospital you have selected. This marker shows where this hospital’s performance sits in relation to the expected range and the national average.

Hover over the icon for a further definition of the quality measure and its source, including details about risk adjustment

Important note 1: These data are a snapshot in time of the relative performance of this hospital. A hospital’s results may fluctuate over time and get progressively better or worse, reflecting the types of procedures they carry out, implants used and/or the types of patients that they treat among other, local factors including whether the hospital is providing a full and accurate submission of data to the NJR. For the revision and mortality information, it is important to note that more recent changes in practice at these hospitals may not be reflected in the results because of the longer five and ten year time periods covered and/or insufficient reporting of first-time and revision operation information to the NJR.

Important note 2: This thermometer chart has been created to aid interpretation of the revision ratio and mortality ratio figures in the table (to the left of the thermometer). It is designed to show where hospitals perform better or worse than the national average and where their performance is within the expected range or outside the expected range.

For any given result (whether better or poorer), it also shows how likely it is that their performance has varied because of ‘chance’ or because of actual practice. This depends on the how far the result is from the national average and the number of patients on which the analysis is based. The further the hospital indicator (black marker) is from the centre, the less likely this is to be down to chance, especially if a large number of patient records have been analysed for the hospital. Where the number of patient records is low, this might indicate a less certain result.

Important note 3: The green band represents the range over which any performance away from the national average is not thought to be significant. However, it also worth noting that there is a less than one in a five hundred chance that the results for any individual hospital could fall outside the expected range by chance alone.

An example for (fictional) Trust A is shown below 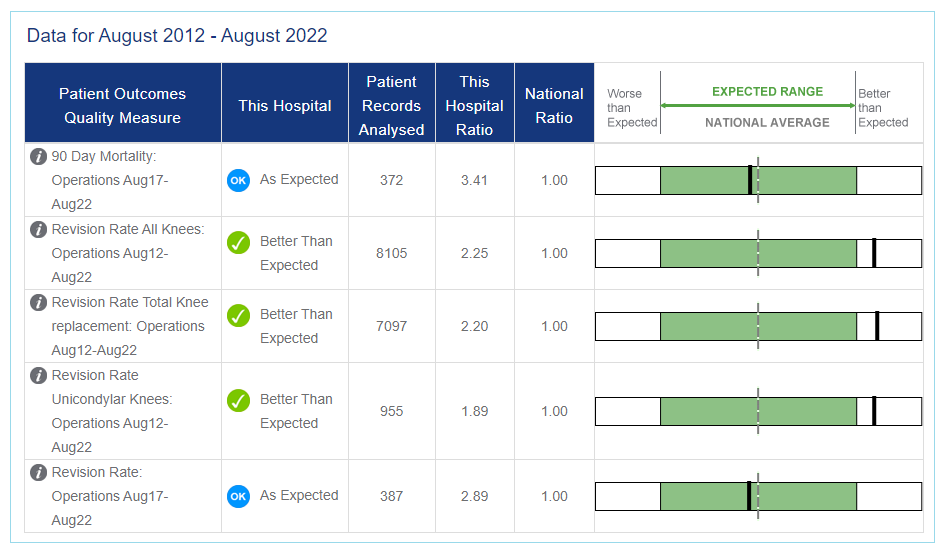 The results for Hospital A show that this hospital is within the expected range for mortality across the 2003 to 2016 time period. For revision, this hospital has performed better than expected for operations carried out between 2003 and 2015. The revision ratio for the five year time period 2009 to 2014 is even lower, but because the number of patients is smaller, this falls just within the expected range.